For a very long time I have nothing posted here... but I have not been idle! Together with my best friend I found a company to produce the best (yes, the best!) 28mm white metal miniatures - Late war Waffen-SS or Wehrmacht Panzergrenadier miniatures. Just look at the picture of follow the link to our news blog and follow our new blog!

I personally believe that pictures and all kind of eye candy is very important for a good blog. Because of that I bought a photo tent, since the sun is of no use to me in this season. These are the first test shots of my Wehrmacht infantry I painted some years ago. I added highlights and more grass, which looks better on the tabletop. I am quite satisfied with the pictures, but what do you think?

... you may still remember, I used to blog something now and then. I was idle for quite a while, but, of course, for some good reasons. I don't want to bore you with the story of my life, so here's the short version: I moved permanently to Berlin, found a new flat and I'm still working, even if the job is still just a temporary one. You can see, I had much to organise and stuff like that. As some may know, I also do LARP, another time consuming hobby. But now I'm settled again and enjoy the diversity of a big city with a vivid wargaming scene. This also lead me to a new project, but more on that later.

First of all, I want to pick up where I left and finish projects I started a while ago. The next thing I want to show is my DBA Roman army (the one I started over nine months ago...). After that I'll see what comes next, but I promise to be more active from now on! I hope there are still some people out there who read my blog ;-)

Email ThisBlogThis!Share to TwitterShare to FacebookShare to Pinterest
Labels: thoughts

I painted a Russian truck for my Barbarossa campaign setting. It's not easy to find some trucks for this period! In the end I took a GAZ-AAA from UM Models, a Ukrainian manufacturer. It's a highly detailed and complex model set and was annoying to built. This is no wargaming model for sure!

A good friend of mine was visiting me on sunday and so we made some matches of DBA. He has played tabletop earlier but isn't an active gamer anymore. Anyhow he quickly learned how to play DBA - it's simply a great game, easy to learn but difficult to master! Ok, he has played DBA twice before when we met after christmas, but that was also some time ago.

So I set everything up and we chose our armies. At the moment I basically own Greeks and Macedonians, so it had to be a combination of these two. My friend chose to field the forces of Antipater. I looked in the list for potential enemies and found Athens, which I played. With these armies we simply had to play the Lamian war (323-322 BC), which broke out after the death of Alexander the great. The Greek cities rose up again to regain their freedom, but were ultimately suppressed and lost their autonomy forever. Focus of the war was the town of Lamia (therefore Lamian war). This conflict was overshadowed by the wars of the Diadochoi, but indeed has much wargaming potential with it's land battles, sieges and marine operations. We decided to interprete the history for our needs, so the following battles are recreated, but only set in the context of the Lamian war

As in history, in our first game the Greeks were attackers. They marched north to conquer the town of Lamia. A Macedonian army was hastily send to prevent this. Both armies clashed on the fertile plains near Lamia. All hills were gentle, so only the woods were difficult terrain.

The view from the Greek perspective: the hoplite phalanx on the left, fully extended. Psiloi and auxilia behind the woods, on the extreme right a unit of cavalry. Not in the picture is a unit of light horse on the extreme left.
On the other side stood the Macedonians. On their right flank was a mighty elephant, in the center the extended pike phalanx. Auxilia closed the gap between the phalanx and the hill. On the hill were the psiloi, behind them the cavalry in reserve.

The deployment from another view.

The Greek general (that was me) wanted to resolve this battle quickly. His plan was to use his longer line to overwhelm the Macedonian phalanx before they could outflank him with their superior and more numerous cavalry (bottom right on the picture). So he pressed on with all his troops.

But it was too late! Antipater destroyed the auxilia, which should guard the flank of the phalanx. Things went bad for the Greeks, who seeked the decision in infantry combat.

This is how the final close combat began. Despite their longer line the Greek phalanx was thrown into disorder. To make things worse the Macedonian cavalry wheeld around to hit the phalanx in the flank, just in time. The Greeks are trapped and so the line collapsed. As the casualty rose the hoplites threw away their shields to run away. The battle ended with a glorious Macedonian victory, they didn't even lost a single base!

Conclusion: it was a fast and fun battle. The Macedonians had a good timing which brought them victory. I need to paint some casualty markers (you don't need them for DBA, but they look pretty cool and I'm a wargaming aesthete).
Posted by Thomas at 11:01 AM 4 comments


I've been busy the last months, finding a new job and such stuff. This left not so much time painting or even playing. Unfortunately this development will go on the rest of the year...

But beside that I do have finished something - a camp for my Greeks and/or Macedonians. It's suitable for FoG and DBA with its size of 12x12cm. The tent, which I shortened a bit, is from Italeri's 'desert well and tents'-set (great stuff!). The miniatures are take from Linear B's 'Roman market', but I think you can also take them as Greek civilians. The miniatures themselves are rather chunky, but do look good painted. The hoplite is from HäT.

To confess a defeat is never easy, but sometimes inevitable. The weekend was filled with work, not just painting, but also making scenery (not for me, so I unfortunately forgot to make some pictures). 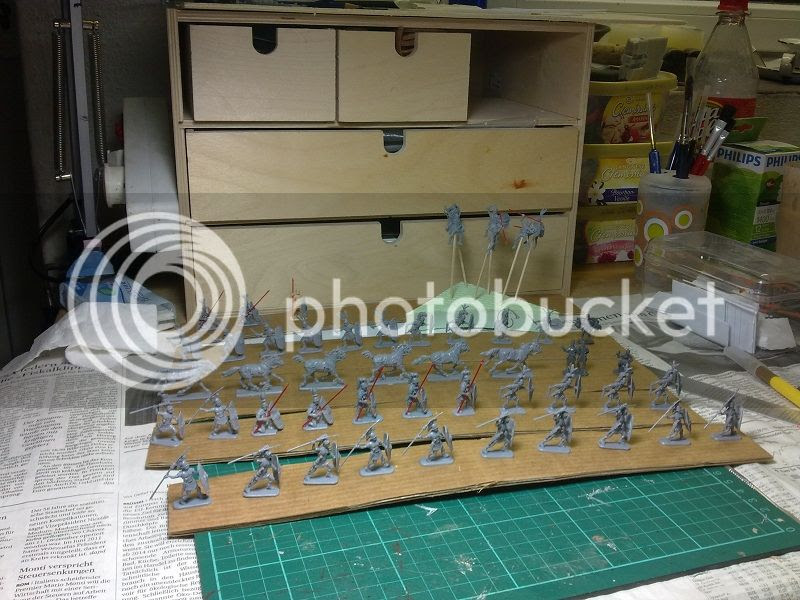 At the beginning everything looked good. I deflashed my miniatures and made some minor conversions. Note the red spears of the cavalry and triairii. They are made of brooms and are much more durable than the soft plastic spears. The legionaries kept their pilum, because it's much shorter and is very detailed. 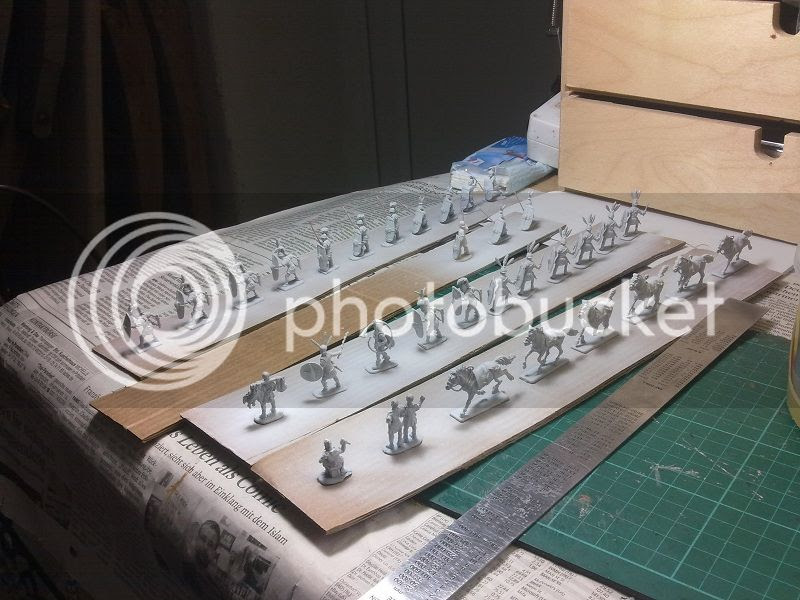 The next step was priming. I primed my miniatures in GW skull white, as one should always work with bright colours when using the army painter dip. The horsemen are missing on that picture. 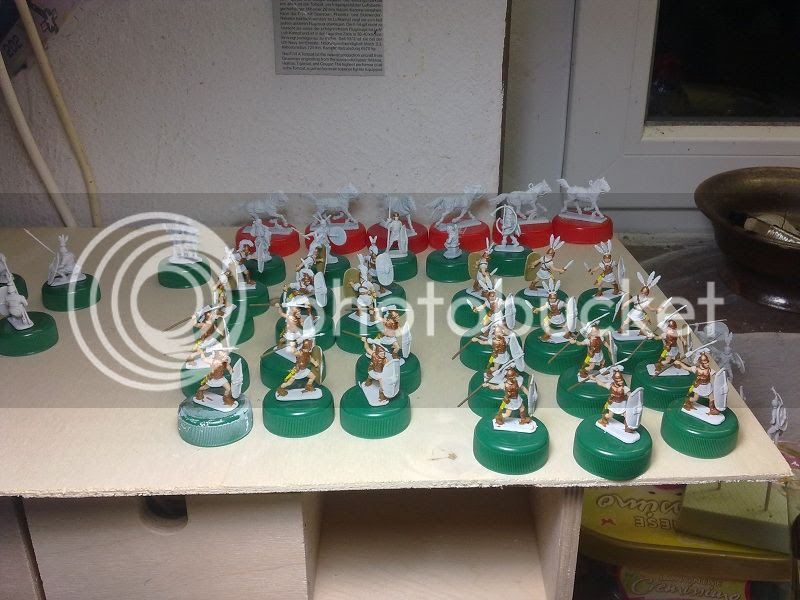 I decided to start with the main bunch of the army, the legionaries. This meant painting 24 similar miniatures. Although I saved time by working on so many figures at once it was also very exhausting and sometimes frustrating. It took me all saturday and sunday to complete them. The picture on the left shows them in WIP status. 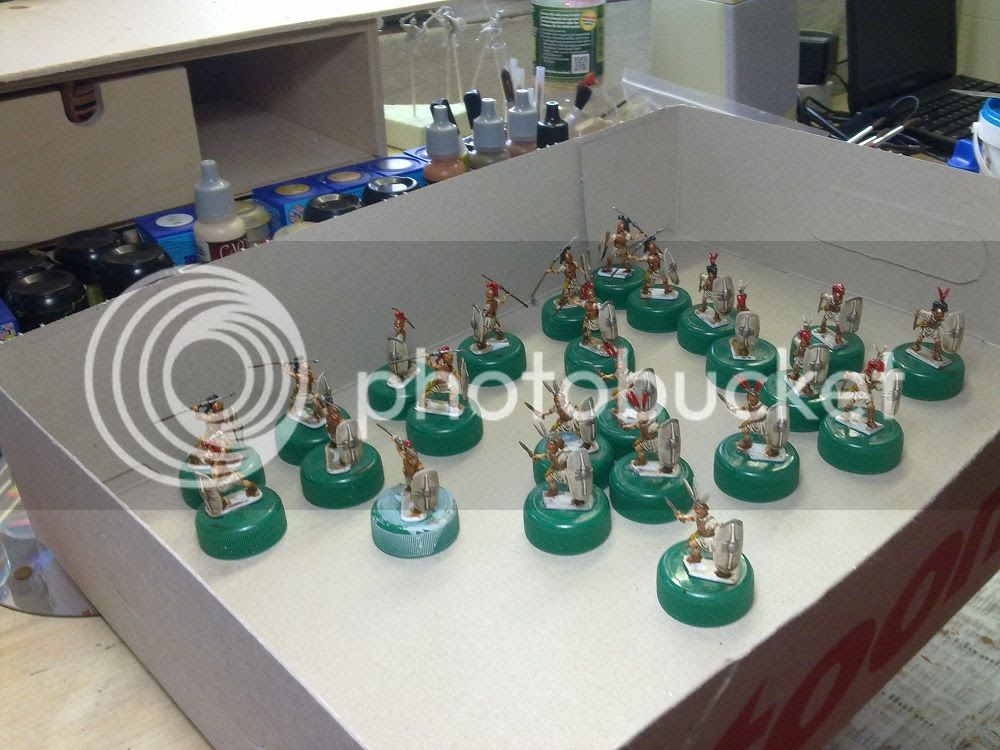 Even though I had a plan, I did not so much on miniatures monday and tuesday. Yesterday evening I applied the dip at last. They need to dry today. After that I'll white their shealds and put on the decal. Then they need to be varnished and based.

I failed my project. It started good, but I underestimated the work and my very own motivation and working speed. I didn't even finished 24 miniatures, not to speak of the whole army. This is of course a bit disappointing.
But I'm an optimist and always look on the positive things in life. The legionaries are nearly finished, the most work is done. I have never painted so many miniatures in such a short amount of time. The army as a whole is pushed a big step forward. And I'm motivated to get the rest done. So, in the end, not everything failed.
Posted by Thomas at 3:32 PM 7 comments

Thomas
Berlin, Germany
I was born in 1986 and play wargames since 2002. It all started with Warhammer Fantasy, but soon shifted to historical wargaming only. My favourite era is the antiquity, especially hellenism and classical Greece. My second field of interest is WWII. with Operation Barbarossa and the campaign in North Africa. My one and only scale is 1/72 or 20mm. The rule systems I use are mainly De Bellis Antiquitatis (DBA) and Disposable Heroes & Coffin for Seven Brothers (DH).